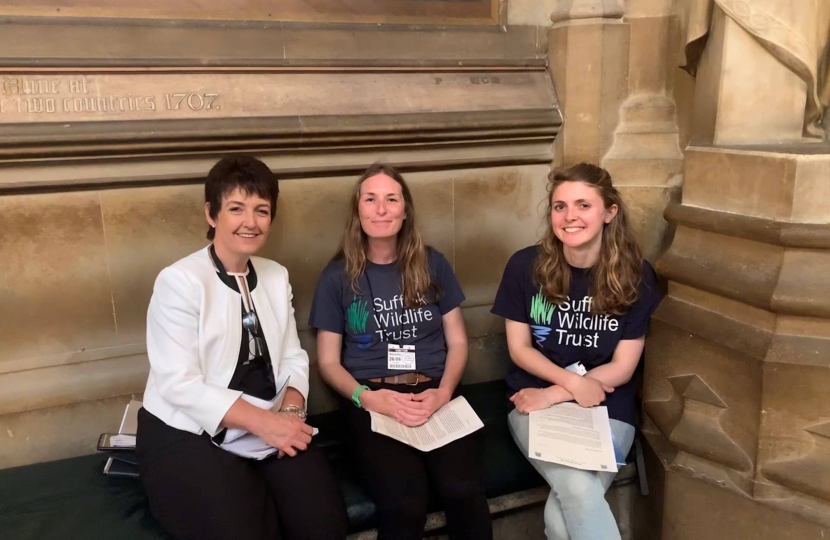 I am pleased that a great deal of work has and is being done to tackle climate change and preserve our environment by Government. It’s an agenda I have been involved with and I wanted to update you on some of the progress. While there have been great strides forward I recognise that there is much more to do and the urgency of going even further is vital.

Importantly, the Government has committed to leaving the environment in a better state than we found it and the 25 Year Environment Plan sets out a framework to enable this. It includes tackling the scourge of plastic, delivering cleaner air and water and crucially using the opportunity Brexit provides to develop our own bespoke agricultural and fisheries policies with a more sustainable focus.

It is clear that tackling climate change is at the forefront of many people’s minds and I am pleased this is being taken extremely seriously in government. Working with the Climate Change Committee, colleagues in government are taking advice on achieving net zero emissions across the economy. Many MPs have pushed for this with strong support from their constituencies.

As we exit the EU, there is an opportunity to rethink our land use policy through the Agriculture Bill. We are lucky to have local farmers who know the value of nurturing the environment and ensuring farmers are paid for the delivery of public goods is a central part of government policy. The Fisheries Bill will also ensure we have a sustainable fishing industry post-Brexit.

In a game-changing moment, demonstrating this Government’s true commitment to the environment, the Chancellor announced a whole range of measures in the recent Spring Statement. Foremost is a new global review to assess the economic value of biodiversity globally so we know what action is needed to take to restore our precious environment which has suffered such a catastrophic decline in recent decades. This could do for the Environment what the Stern Report did for Climate Change. In addition, we will enhance environmental standards through the forthcoming Environment Bill and establish a world-leading, green governance body – the Office for Environmental Protection – to uphold environmental legislation.

I was honoured to participate in The Queen’s Commonwealth Canopy, which focuses on creating sustainable forest conservation initiatives throughout the 53 countries of the commonwealth, ensuring we have green spaces to enjoy for years to come. As part of the project I planted silver birch, rowan and hazel tree saplings locally.

I am also proud to be a supporter of the Great British Spring Clean, which takes place annually between March and April. The campaign led by Keep Britain Tidy aims to encourage people around the country to litter pick in order to help improve the environment on their doorstep. They are aiming to inspire 500,000 people to join forces - in partnership with community organisations, businesses and the government - to collect and safely dispose of litter from our streets, parks and beaches, recycling as much as possible.

As a Minister, I am bound by the convention of collective responsibility which prevents me from speaking in debates, such as the recent Opposition Day debate to declare a climate emergency. However, my position allows me direct access to Ministers and I have had several conversations with Claire Perry and Michael Gove about this issue.

I hope you will agree that the Government is demonstrating a genuine commitment to leaving the Environment in a better state than we found it. Whilst many positive steps have been taken, I realise there is much more to do and the urgency of addressing this has certainly been stressed to me by many individuals and groups that I have met with.  Rest assured I understand this message which is so important for future generations. Climate Change has no boundaries and it is important that it is tackled worldwide. I would like to see the UK host the COP26 and push for others to do more. This is a global issue and the response must be from polluters such as China, India & the United States if we are to reverse the trend.

I am delighted to announce a new monthly newsletter delivered directly to the constituent's inbox with news of my activities in Parliament and the constituency.