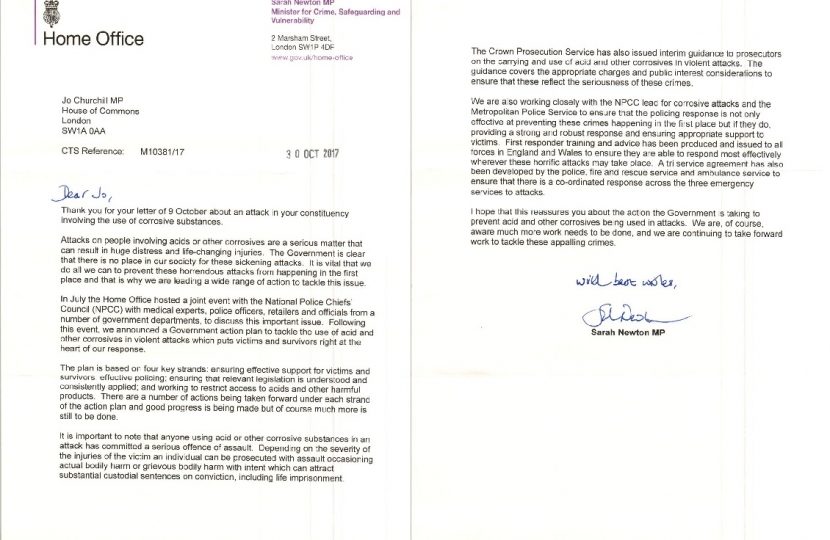 On 9th October, I wrote to the Home Secretary following the horrific events in Bury St Edmunds involving the use of corrosive substances.

This is not something any community should expect to happen, let alone rural Suffolk. However, I wanted to raise this incident, one which has tended to be confined to metropolitan areas, with the Home Office.

The Government has promised a swift, wide-ranging review of the use of corrosive substances and I have received the following, further assurances on this matter.

Further to the Government’s announcement to conduct a wide ranging review of the current legislation around corrosive and harmful substances, I am writing with regards to an attack involving corrosive substances in my Bury St Edmunds constituency.

The recent incident, which is still under police investigation, involved the use of a noxious substance to harm the victim in question. The substance was thrown at the victim outside a local pub, in Bury St Edmunds. This attack, succeeds an acid attack in Lowestoft in 2014.

My reason for raising this case with you, apart from the utter abhorrence of the incident, is that although an isolated incident it is one which shocked our rural community to its core.

Acid attacks and other similar attacks, have tended to be centred in metropolitan areas and particularly London. Although isolated incidents, the reaction of the police and community in Suffolk, has been of concern that an issue which has tended to be confined to urban areas, may occur in the Suffolk.

The spread of attacks as well as the ease with which toxic substances may be acquired is worrying to the public. For that reason, I wanted to draw these incidents to your attention particularly, as the Department conducts a wide-ranging review. I hope this evidence may feed into the understanding of incidents of acid attacks, and how harmful substances are used.

I look forward to learning the results of the review and how this Government can best reassure the public against these truly evil crimes.

Attacks on people involving acids or other corrosives are a serious matter that can result in huge distress and life-changing injuries. The Government is clear that there is no place in our society for these sickening attacks. It is vital that we do all we can to prevent these horrendous attacks from happening in the first place and that is why we are leading a wide range of action to tackle this issue.

In July the Home Office hosted a joint event with the National Police Chiefs’ Council (NPCC) with medical experts, police officers, retailers and officials from a number of government departments, to discuss this important issue. Following this event, we announced a Government action plan to tackle the use of acid and other corrosives in violent attacks which puts victims and survivors right at the heart of our response.

The plan is based on four key strands: ensuring effective support for victims and survivors; effective policing; ensuring that relevant legislation is understood and consistently applied; and working to restrict access to acids and other harmful products. There are a number of actions being taken forward under each strand of the action plan and good progress is being made but of course much more is still to be done.

It is important to note that anyone using acid or other corrosive substances in an attack has committed a serious offence of assault. Depending on the severity of the injuries of the victim an individual can be prosecuted with assault occasioning actual bodily harm or grievous bodily harm with intent which can attract substantial custodial sentences on conviction, including life imprisonment.

The Crown Prosecution Service has also issued interim guidance to prosecutors on the carrying and use of acid and other corrosives in violent attacks. The guidance covers the appropriate charges and public interest considerations to ensure that these reflect the seriousness of these crimes.

We are also working closely with the NPCC lead for corrosive attacks and the Metropolitan Police Service to ensure that the policing response is not only effective at preventing these crimes happening in the first place but if they do, providing a strong and robust response and ensuring appropriate support to victims. First responder training and advice has been produced and issued to all forces in England and Wales to ensure they are able to respond most effectively wherever these horrific attacks may take place. A tri service agreement has also been developed by the police, fire and rescue service and ambulance service to ensure that there is a co-ordinated response across the three emergency services to attacks.

I hope that this reassures you about the action the Government is taking to prevent acid and other corrosives being used in attacks. We are, of course, aware much more work needs to be done, and we are continuing to take forward work to tackle these appalling crimes.