Working Hard for Bury St Edmunds, Stowmarket, Needham Market & all the villages in between

Having cheered on the Lionesses in this summer’s World Cup and as we approach the start of the new football season, I am heartened by how some of our non-league clubs are growing within their community.

It is clear that a football club is a big part of any town and that is evident in Needham Market, Stowmarket, Bury St Edmunds and beyond.

Along with Ipswich Town legend George Burley, I spent a recent Saturday afternoon at Bloomfields, home of Needham Market, to help officially open the club’s new 3G pitch as well as a new community building which includes changing rooms, café and a multifunction room.

This allows Needham a great opportunity to offer even more opportunities to women, children and disabled footballers.
It was lovely to receive an official Grassroots Champion award on the day, but the real champions are everyone involved in this amazing project.

But Needham are not alone in achieving great success on and off the pitch.

I am delighted to be supporting Stowmarket Town with a new facility, which has recently received positive feedback following a public consultation led by Suffolk FA. The new facility at Stowmarket will provide a place for clubs across Mid Suffolk to access a first class football pitch. Currently Mid Suffolk only has access to one of these pitches, at Needham Market, which is why any further sporting investment is welcomed.

It is also heartening to hear that Bury Town now has more than 30 youth teams preparing for the new season, including more and more girls’ teams.

There is a really strong correlation between children who take part in physical activity being stronger at resisting being pulled into criminality and other problems as they get older.

There are also the obvious health benefits from participating in sport and the positive effects on mental health.

Of course, none of this success would be possible without the hard work and commitment of so many volunteers. I salute you all and wish you all a very successful new season. 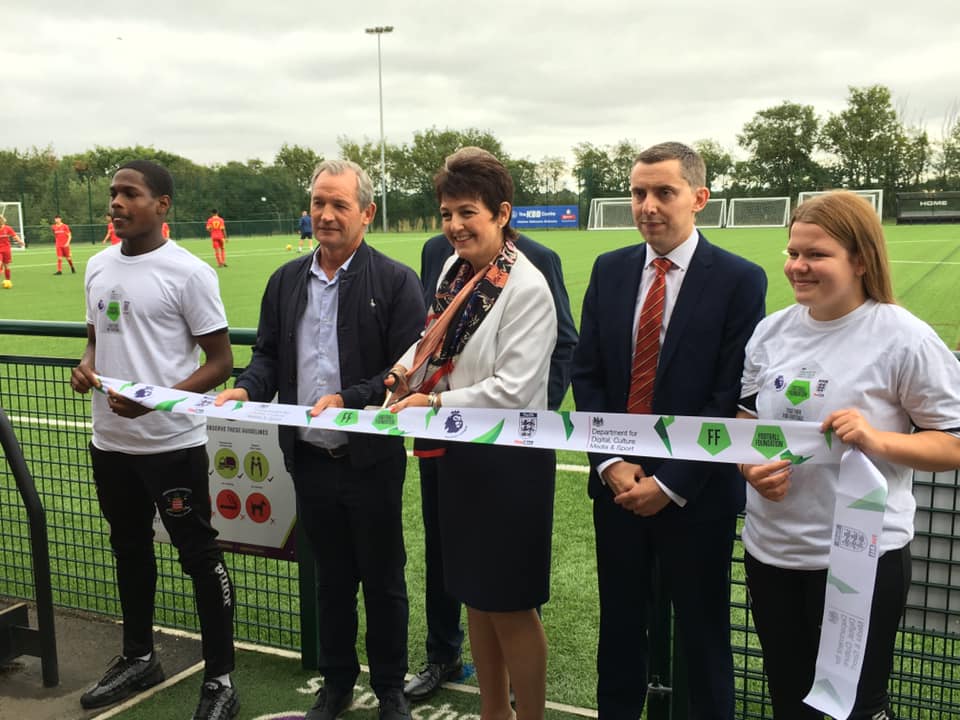 Last week saw a mass lobby event in Westminster on climate change. I was pleased to meet with members of the Suffolk Wildlife Trust and constituents during the day. We discussed the importance of taking action in a number of areas to preserve the environment for future generations.

This was most timely as in the same week we became one of the first major economies to pass into law a commitment to reach net zero emissions by 2050. This will end the UK’s contribution to global warming and further strengthening our position as a world leader on climate change.

For the first time since the industrial revolution, we recently went a fortnight without coal generated power. Our decreasing reliance on coal generated power is due in part to our investment in renewables, which now account for over a third of electricity generation in the UK. If we want to sustain our standard of living, our energy must be created from sustainable sources.

Crucially, our leadership on emissions reduction has not jeopardised our ability to grow the economy. Between 1990 and 2017 we cut emissions by over 40% while growing the economy by more than two thirds. The low carbon economy and its supply chain already accounts for nearly 400,000 jobs. One estimate suggests this could grow to 2 million jobs by 2030. The sooner we adopt new technologies, the greater the likelihood of us becoming world leaders in their development, allowing us to benefit from economic as well as environmental benefits.

The transition to a net zero economy has a number of opportunities to drive expertise we have already developed in areas, such as offshore wind, and can lead to the creation of high-value and high skilled jobs and new business opportunities.

Our action will hopefully act as a catalyst for other countries to take similar action. Climate change has no borders. We need global cooperation on this issue. This only happens when one country is brave enough to take the lead and gets others to raise their ambitions.

Undoubtedly, there will be challenges ahead, but also opportunities. The benefits for all of us, particularly future generations, are clear. We will only succeed if we all work together. 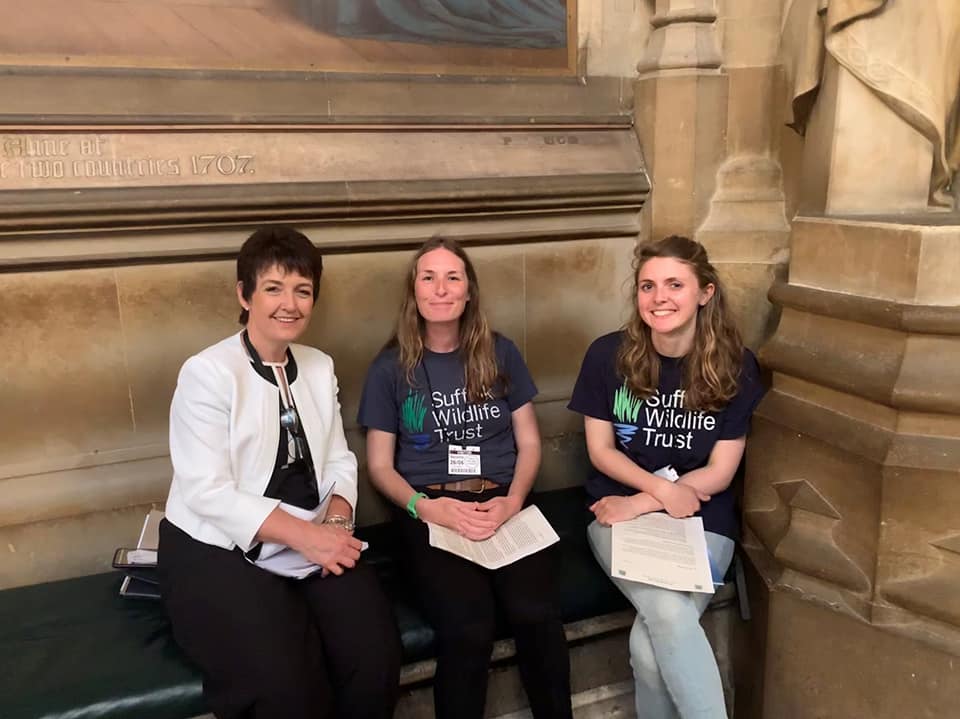 Greater Anglia has launched an additional four services between Norwich, Ipswich and London Liverpool Street to speed up travel between our region and London. I travelled to London on the inaugural service from Ipswich and I must say it got off to a great start as we arrived three minutes early.

With the roll out of the new trains beginning this summer, passengers were already set to benefit from more reliable and comfortable journeys. It is my ambition that these initial four daily services are expanded and that we see regular services between Suffolk and London in under 60 minutes, at times that better suit commuters.

Our region is an economic hub. We have a thriving technology sector, including agri-tech, are home to major companies such as Greene King, British Sugar and Muntons and have a whole range of businesses using the Port of Felixstowe. Increasing the transport connectivity with London will give our region a further economic boost.

As we all know, Bury St Edmunds and beyond has a fantastic tourism offer. Whether it is our awe-inspiring cathedral, the Abbey ruins that are the site of one of the most significant monasteries in Europe, our unique place in the history of the Magna Carta, the story of St Edmund and final resting place of a French Tudor Queen. Not to mention the Museum of East Anglian Life in Stowmarket or the historic High Street and Church of St John the Baptist in Needham Market. We are also home to Britain’s last remaining regency theatre and have links to Shakespeare, Charles Dickens and Norah Lofts.

We already welcome hundreds of thousands of people every year. Improved rail links with London will hopefully lead to more people visiting our wonderful area, helping us compete for a bigger share of the tourist pound.

As I have said, we have seen the start of the faster services between Norwich, Ipswich and London. It is my ambition for these services to become more regular and to build upon the connectivity within our region as well. 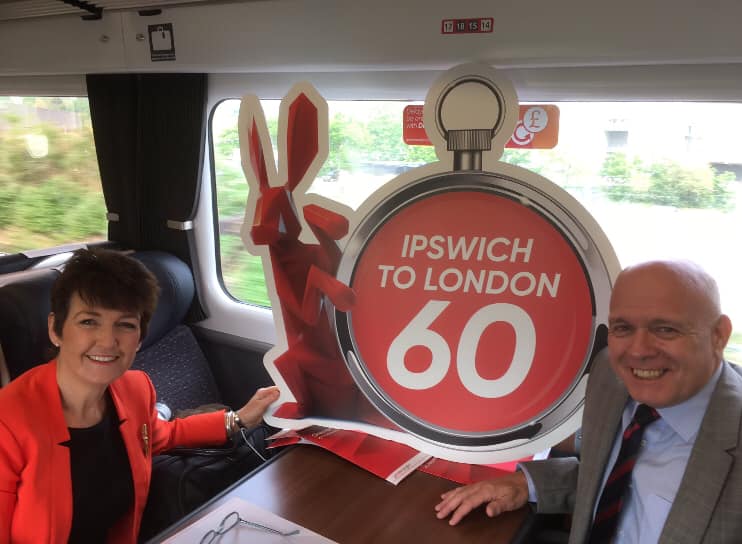